Differences between men and women

Looking at the gender of the candidates, there are also some notable differences. Women are more bothered by inappropriate language, while men are more bothered than average by an interviewer who is trying to impress. Women are also more annoyed than men by the lack of interest shown by the interviewer, frequent interruptions while talking, a lack of clarity in the continuation of the procedure and avoidance of eye contact. 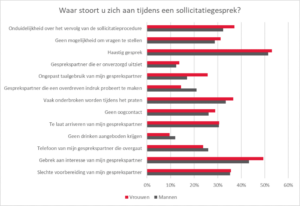 Points of attention per age segment

The deviations from the average are greatest when we break down the respondents by age. The age groups always cover five years, with the exception of the 50+ segment. The 20-24, 25-29 and 30-34 age groups show relatively few deviations from the average. The youngest age group (15-19), on the other hand, deviates significantly from the average. They are more annoyed than average by frequent interruptions while talking, a lack of clarity in the continuation of the procedure and a lack of opportunity to ask questions. On the other hand, they are significantly less bothered than the average by poor preparation on the part of the interviewer, being late, avoiding eye contact and a ringing telephone.

The 35-39 and 40-44 age groups are excessively annoyed by rushed interviews and poor preparation. The 40-44 age group is also the most sensitive to the late arrival of the interviewer. On the other hand, they do complain less about a lack of interest. Among 45-49-year-olds, a ringing phone and avoidance of eye contact are above-average sources of annoyance. The latter is something they have in common with the over-50s, who are also excessively annoyed by a perceived lack of interest. They are less annoyed than average by being interrupted while talking. The 45-49 age group is less bothered than the average by a rushed interview and by a lack of clarity about the course of the procedure.

There is still a lot of room for improvement for organisations when it comes to conducting job interviews. It is also wise to take into account specific annoyances by gender, education level and age group. Allowing enough time for the interview and showing interest in the candidate are the most important general points for improvement.