Analyzing data is a challenging process

Analyzing data is a challenging process today. Especially through social transparency. We know more about our candidates than we ever knew. But that also applies the other way around: the candidates know a lot about you as an employer in advance. In order to use data in the right way, IBM consults Giant! (previously known as the European Recruitment Dashboard), among other things. “This specific dashboard is nowhere else to be found,” according to Andrew Steijaart. On the internet you can often also find information for general professions. However, this information is often local. This makes it more difficult to make a comparison in different countries on an international level. Giant! contains job information from different countries, which saves a lot of research time.

IBM Talent & Transformation got an assignment to take on a large group of blue collar professions for a global international company in the Czech Republic, cecause there was too little HR capacity in the organization. A specific need for this is that these people have a CNC qualification. Little was known in advance about the target group because, for example, no LinkedIn profile could be found online. But there is also little known about the competitors. 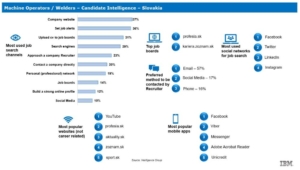 How do blue collar employees orientate themselves?

Potential candidates were also examined outside of the Czech Republic. Questions like: to what extent is international talent willing to move? What are the reasons for moving? Does a candidate want to stay abroad for a temporary period of two years or could it be longer? All this information can be found in Giant!. It gives a lot of insights which lead to adjusting the campaign strategy. Specific example: the choice of elements that are important for this target group and therefore to focus on in the campaign. Identifying the most important pull factors, but also the willingness to travel and how to deal with the right work/life balance.

Giant! has provided many new insights. Both to the HR department and to the recruiters who are involved in the candidate experience. In addition, the new strategy is based on information from the dashboard. Without this information, IBM could not have made this clear. Simply because the information about this target group and in these countries cannot be found anywhere else. If there is any information to be found, this is often old and therefore not relevant. Finally, it saves a lot of research and time in order to use your work time more efficient.

"Intelligence Group is a flexible company that really thinks and moves with you. Giant! is a user-friendly tool that provides insights you cannot find anywhere else."

Are you also interested in Giant and do you want to know more about the applicability of this dashboard for your recruitment activities?
Please contact us!